Species of Thismia may are in my biased opinion the most remarkable and mysterious plants on this planet. But studying them is complicated, as most species are known from only very few collections made in remote rain forest areas. Luckily, there are exceptions. In Australia and New Zealand there are a few species of Thismia, and in recent years more and more localities have been discovered. Nevertheless, even down under Thismia has a very patchy distribution and is considered to be a very rare plant.

Since these plants rely entirely on their mycorrhizal fungi for survival, they are excellent examples to study potential limitations in their distribution due to their interactions. In other words: if their preferred fungus is absent in a region, do they fail to colonize this region, or can they adapt and start exploiting another fungus? That is exactly what I wanted to address in the project ‘Does specialization lead to rarity?’ funded by the Netherlands Organization for Scientific Research (NWO). 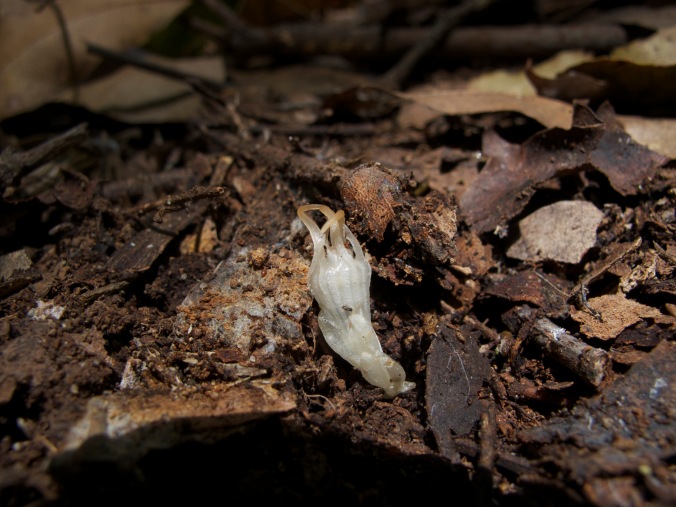 First of all, we needed samples. With the help of several local experts we collected specimens of Thismia from as many populations as possible in Australia and New Zealand. This was an unforgettable experience!

We managed to sample many more populations than expected, and during the field work we discovered several new localities and even a putative new species. The DNA of all plant specimens was analyzed to reconstruct their evolutionary relationships. At the same time, we identified the mycorrhizal fungi in the roots of each plants by DNA barcoding. The results look like this: 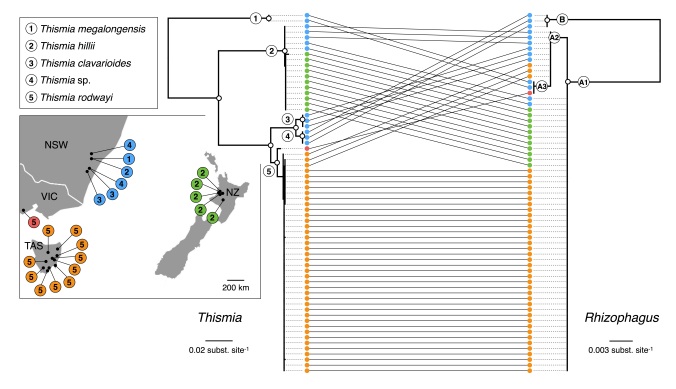 Almost all sampled specimens of Thismia grown with the same fungus (or very narrow lineage of fungi – we don’t really know). Only one species was found growing with an different lineage of fungi. Evolutionary reconstructions indicate that this specificity was already present in the common ancestor of these species, and apparently it did not limit the recent radiation and dispersal (from Australia to Tasmania and New Zealand) of the plants. The fungus these plants use is probably quite widespread, and does not seem to limit the distribution of the plants. Therefore, specialization is not necessarily an evolutionary disadvantage (as it is sometime seen), particularly if your host is successful and widespread.

The full paper published in Journal of Biogeography can be found here (open access): http://onlinelibrary.wiley.com/doi/10.1111/jbi.12994/full

If you have ever searched for mycoheterotrophic plants in rain forest, you may be familiar with this phenomenon: 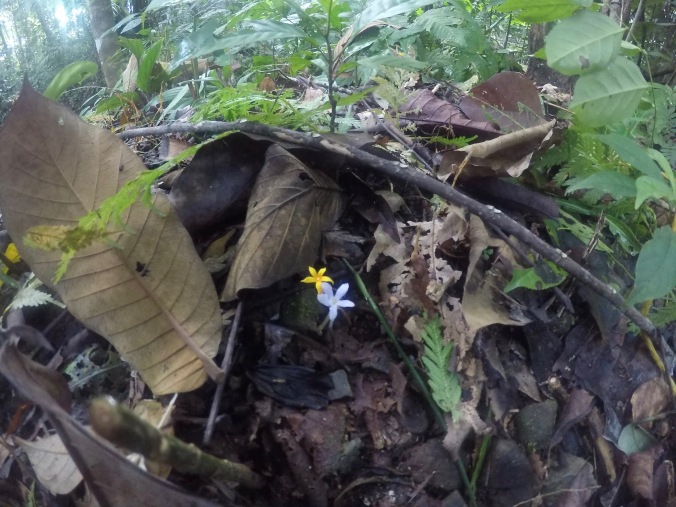 Once you find a species, more species can often be found in the direct surroundings. Many botanists who studied mycoheterotrophic plants noticed this. In his treatment of the Burmanniaceae Frederik Jonker (1938) wrote:

“It is striking that at a certain habitat often a number of species grow together, often too in company with Triuridaceae and saprophytic Gentianaceae or Polygalaceae, so that one sometimes meets in a herbarium with several saprophytic species under the same collector’s number”

“In the literature several cases of saprophytes growing together are described, see van der Pijl (1934). van der Pijl presumes that this is produced by the presence of a fungus. However it is not yet known if the endophyte of all these saprophytes is identical, it is quite likely that it is in every case a Phycomycete, probably belonging to the Peronosporaceae”

We now know that the plants Jonker mentions target Glomeromycotina (not ‘Glomeromycota’ anymore, see here). Also, research has suggested that co-existing mycoheterotrophs do not necessarily grow on the same fungus. And indeed, if the fungi are ‘food’ for the mycoheterotrophs, then having a diverse diet may help to avoid competition with other mycoheterotrophs, and promore co-existence. But if the diets of two plants are completely different, then it becomes unlikely that they co-occur. To test this hypothesis, PhD student Sofia Gomes and myself teamed with MIT professor Serguei Saavedra. Together, we explored the fungal interaction patterns of mycoheterotrophs from several sites in French Guiana and Brazil. 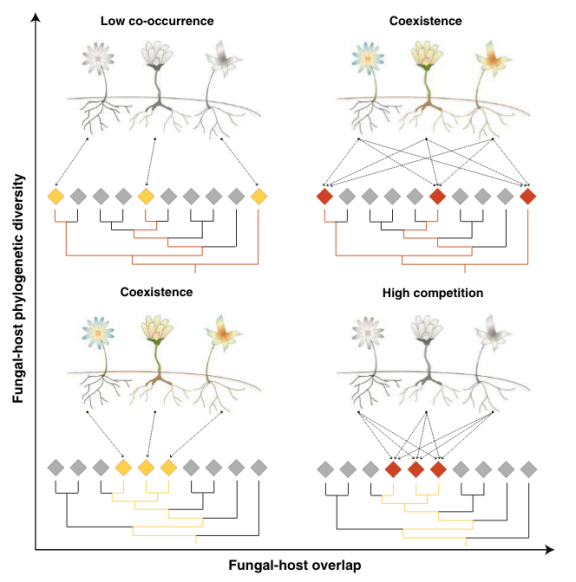 Our hypothesis on how plant co-existence may be influenced by mycorrhizal interactions.

And indeed, the results show that in communities of co-occurring mycoheterotrophic plant species, the diversity of their fungal ‘diet’ appears to increase proportionally to their overlap in fungal ‘diet’. These results indicate that fungus-plant interactions can be better explained by understanding plant–plant interactions generated by sharing resources or fungal hosts.

It remains to be tested whether this symmetry between diversity and overlap in fungal diet may respond to an ecological mechanism driven by maximizing co-occurrence and avoiding competitive exclusion among mycoheterotrophic plants. However, the results show that plant coexistence cannot be fully understood without attention to their underground interactions.